How ATHLETIC is your child? 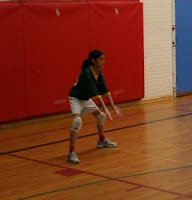 I’m so proud of my daughter.

Tuesday we watched AJ play in the Toronto District School Board’s volleyball conference semi-finals. She was great – saving a couple of balls, getting her fair share of service aces and making a nifty little play of popping the ball up as it careened off the net.

Truthfully, volleyball at this level is just a matter of which team makes the least mistakes. Nonetheless, it’s done wonders for her and her team’s confidence.

I sat there quietly as I always do (I like to shout words of encouragement, but it’s not my demeanor to go nuts in the stands – unlike Rozanne who get right into it). Sitting in the bleachers, I was observing some of the parents and how they would yell instruction at their kids while they were on the court.

In my experience, making any attempt to coach a child or try to give them technical pointers while they’re in the midst of competition is futile. So yelling things like “spread your fingers” or “bend your knees more” will only frustrate or even worse diminish your child’s confidence.

My view is, that at this level, whatever isn’t practiced or taught in practice will not miraculously appear in game play…so don’t bother…enjoy the game and keep your kid’s confidence up with words of encouragement.

But my post today isn’t so much about coaching, but about determining whether your young sports participant is an ATHLETE or a PLAYER…

Well, here in Canada for example, parents are rabid about hockey.

I see it everywhere – kids playing in their competitive leagues during the season, going to skills camps on the weekend, doing hockey specific conditioning after school, doing summer skills camps in the off-season, playing in Summer hockey leagues.

Basically it’s hockey 48-weeks per year, non-stop, all in the hopes of “creating” the next Howe, Gretzky or Crosby.

And it’s not just hockey. AJ has teammates on her traveling soccer squad that have similar schedules for soccer.

It makes you ask the question…do you want to create a kid that is good at one sport so early? Should kids be so specialized at such an early age?

Is playing and being dedicated to ONE sport year-round for years and years on end good for your child?

Going around and asking colleagues and experts who have been in the game for a number of years, the answer seems to be a collective – NO.

Studies have shown that early specialization in sport (before puberty) results in a higher likelihood of overuse injuries and athlete burnout in addition to other social aspects of playing only one sport.

(For more information on early specialization and on guidance as a parent of an athletic child, check out www.educatedsportsparent.com).

I think our goal as parents of children who participate in sports is to develop ATHLETICISM and NOT specialization.

Athletes are developed through participating in a myriad of activities and sports – both structured and unstructured.

Michael Jordan was a baseball player before he took up basketball full time.

Wayne Gretzky couldn’t wait for hockey season to be over so that he could go outside and play with his friends in the summer.

When I was a kid I played baseball, basketball, ran track and eventually fell in love with volleyball. Prior to the age of 14, I only participated in community leagues with the bulk of my time being spent, riding my skateboard or my bike, playing stick-ball in the street or having crab walk races with my friends up someone’s driveway.

These days I think kids need to just play more in an unstructured environment. Swinging on monkey bars, having foot races down the block, playing “tag” all develop athletic skills that will carry over into most team and individual sports.

And if you’re a parent with the hopes of gunning for that college scholarship to ease your financial burden later on, I’ve got news for you. Speaking from a coach’s and former varsity athlete’s perspective…scouts and varsity coaches will usually take an ATHLETIC kid over a kid with better than average skills at one particular sport.

They’re out to pluck the athletes that run fast, jump high and are able to stop on a dime and change direction with lightning quick efficiency.

-Volleyball season is over at the end of the month. After that, chances are that she won’t touch a volleyball (unless we “pepper” on the beach or something in the summer) until September when the club season starts.

-From March to May we’ll try to get in as much family activity as we can. We’re a bit limited because of Rozanne’s broken ankle, but don’t be surprised if we book a weekend to go snowboarding/skiing, go on some nature walks or get a bike ride in when the weather gets better. She’ll also have soccer practice once or twice per week come April, so we’ll be there for her to get her “soccer legs” back.

-she’ll also participate in track and softball (although, I don’t know how keen she’ll be with softball considering I broke her nose playing catch with her this past fall…see LEFT)

-And of course, throughout the summer we like to head over to Withrow Park in Toronto’s Riverdale neighbourhood to shop at the organic farmer’s market and then play in the field or playground.

I guess the point that I’m trying to make is that kids need to be kids and need a VARIETY of activities help promote and support an active lifestyle.

I love competitive sports and it’s a dream of mine to have one of my daughters be so successful at it that it could warrant her getting an athletic scholarship to a top school and thus receive a world class education. But my job right now as a parent and as an expert in the field of exercise and health is to make sure that she develops as an ATHLETIC KID and not as a soccer or volleyball player.

That she develops a HEALTHY LOVE FOR SPORT & COMPETITION and doesn’t feel pressured to have to succeed early on in her athletic career.

P.S. I’d love to hear your comments on this post – both for and against. I think it’s an important topic that parents need to understand and recognize.

4 thoughts on “How ATHLETIC is your child?”